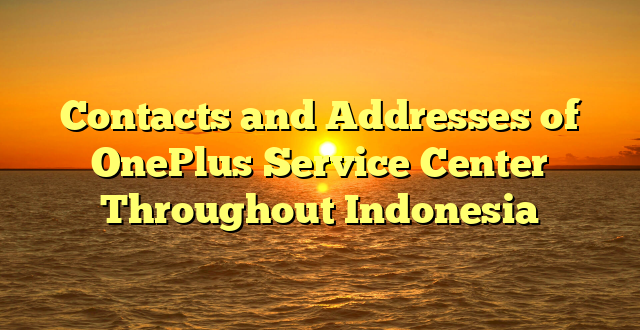 Contacts and Addresses of OnePlus Service Center Throughout Indonesia

Contacts and Addresses of OnePlus Service Center Throughout Indonesia

OnePlus service center is the most appropriate place for every smartphone user with the brand if experiencing various problems. OnePlus itself is a subsidiary of Oppo which is also a well-known smartphone manufacturer today in the world. The company , which originated from China, began presenting its products on the market in 2014.

The first smarthphone released in 2014 was the One series which was equipped with Snapdragon’s 800 series chipset. At the beginning of its sales this series has not been very able to attract the attention of many people. After some time, many people began to be interested in this new smartphone until sales reached more than one million units at the end of 2014.

The next smartphone did not have as much success as the previous series. OnePlus 2 is considered not to have a mature enough preparation so it is far from a success. This series has some improvements to certain features only such as batteries, fingerprints, and other things. The increase caused the price of this mobile phone is also quite increased compared to before.

After these two series, more precisely the OnePlus 5 quality features offered are much growing rapidly. Starting many people are interested in trying it immediately because the best features can be felt at a relatively cheap price. The rapid development of OnePlus makes many people from various parts of the world use it including Indonesia.

Not a few Indonesians try to use this brand of smartphone. One of the reasons is certainly from the affordable price. If you have become one of the users, there are several things that need to be known in detail. One of the important information is about the contacts and addresses of the service center  around where you live. Here’s more information about these locations.

The Special Capital Area (DKI) jakarta has a large population. This led to many head offices located in the area. One of them is the head office of OnePlus which is also located in Jakarta. The location of the office is on Jalan Letjen Suprapto Pusat or more precisely the Cempaka Mas Block P shophouse complex with phone number 021 42870262.

In addition to the head office, there are several service center locations located in several major cities in Indonesia to meet the needs of users other than Jakarta. In the Tangerang or Bintaro area you can find it in the Kebayoran Arcade 2 Block B2 shophouse. The location is masUK into the Pondok Jaya area, Tangerang and you can also contact him via phone to the number 021 29511850.

Bandung as the capital of West Java Province is also one of the cities that has an official OnePlus repair place. The place is Naripan Street number 109 B with phone 022 4230424. As a big city, Bandung also has many residents including easy children who become the most OnePlus consumers compared to other circles.

Purwarkata which is also part of West Java also provides a location to help all OnePlus consumers when experiencing problems with their mobile phones. You can go directly to the location at Jalan Jenderal Sudirman number 216 and by phone to 0264 231784. Before you go to him, you can call first to make sure a few things.

The Central Java area also has a population that is not inferior to DKI Jakarta. The large area makes the distribution of residents in Central Java more evenly distributed than other Indonesian provinces. As the provincial capital, of course, Semarang is the largest and most complete city compared to others. Naturally, if you can find a place to repair this Chinese smartphone in the area.

Ruko Karang Turi Blok G located on Jalan MT Haryono is the location of OnePlus service center. You can contact by phone first to 024 8314056 if you have a few questions before deciding to visit the location. To come directly, of course, it is necessary to adjust to the opening hours or often called office work hours.

The next famous second city  in Central Java is Solo. Of course, many people have heard or come to the city with this characteristic batik. As a resident or immigrant of  Solo city, you can do an official mobile phone repair Matahari Singosaren and go directly to Cobra Celluler on the 2nd floor. The number that can be contacted is 0271 7059007.

Gudeg City or Yogyakarta Special Region is a province has an area not too large however, has a fairly large population. The area is quite crowded also because of the large number of students who are studying. OnePlus smartphone repair place is Ruko Jogja Town House Jalan Sorowajan Baru 0274 4535079.

Surabaya which is included in the 10 largest cities in Indonesia is certainly complete in various sectors of life including technology. In terms of technology where to improve is very important. Therefore, you can also find a place of repair for mobile phones from this Oppo subsidiary at The Maspion Square Mastech Block F11 shophouse and tel 0312 8877911.

Near Surabaya, you can also find the office in Malang City by directly visiting the Soekarno Hatta Kavling 3 Road area with a phone 0341 410393. In addition to these two cities, you can also find it at Jalan Bhayangkara no 89, Mojokerto. The telephone that can be contacted at Mojokerto is 0321 324917.

For those of you who live or are in the area around Bali and need services from OnePlus service center can go to Ruko Teuku Umar No. 8 Jalan Blok Umar or call 0361 225678. While the Lombok area is located at Cakranegara Jalan Panca Usaha Number 21C and calls 0370 639702.

Around the island of Sumatra, there are also several locations of official OnePlus repair centers that you can directly visit. Currently the number is indeed less than those on the island of Java however, Sumatra is still more when compared to other large Indonesian islands.

The northernmost area in Sumatra is the OnePlus service center in Aceh City with the address Jalan Teuku Panglima Polem No. 35-37. This location is located in the Banda Aceh area and can also be contacted via 0651 28899. All your smartphone problems can be solved if you go to that location. The repair process will be carried out in the office directly if it is not needed to be sent to the center.

The next repair location not far from Aceh is in Medan City with the address of Simpang Pasar area precisely at Ruko Panjang No. 3 Jalan Ringroad. Like other locations, there is a telephone that can be contacted directly, namely 061 77060091. Questions and checking the repair process can be asked first by calling him.

The last city of Sumatra that has a repair center is Lampung and can be located on Jalan Diponegoro No. 82B Ruko Starsel, Teluk Betung. Another way to get information for those of you who are in Lampung is to call 0721 473445 and will be directly connected to the city’s repair agency.

Although the smartphone used is not made in Indonesia, you don’t need to worry if you experience various problems. There are many places you can go to solve all these problems. The best place for you to make repairs is of course only onePlus service center.